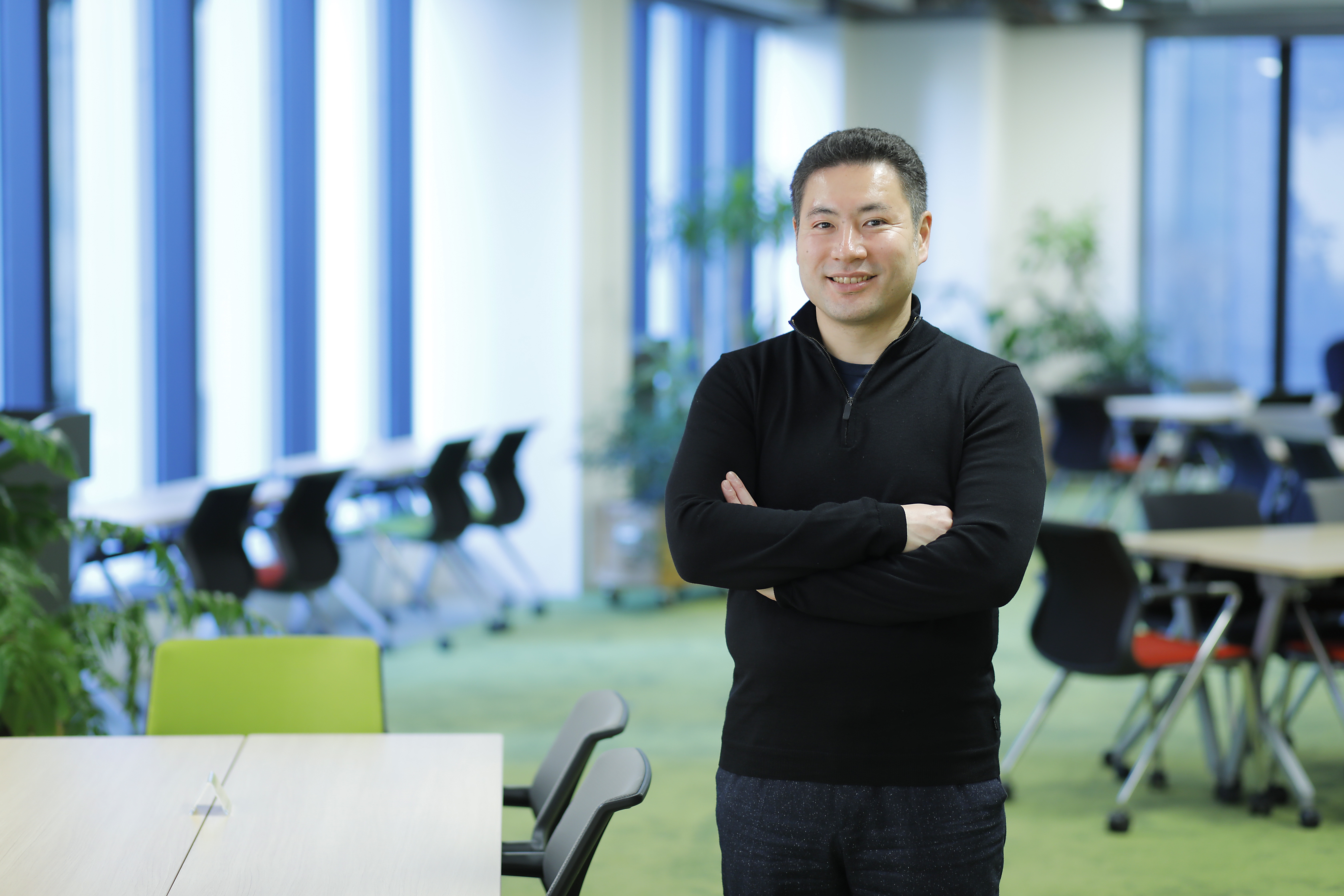 acting head of the APAC region of Symphony

What are the values of global professionals, what do they seek from their workplace and colleagues, and what do they emphasize upon in order to improve work performance? These are some of the questions that this interview, which focuses on companies that have undergone rapid international expansion and the leading startup company in Japan, seeks to answer.

For this, we invited Mr. Gen Uehara, acting head of the APAC region of Symphony, which has attracted investment from 15 major financial institutions from around the world. We asked him about this innovative business that is believed to have changed the prospects of financial institutions.

The secure environment, which caught the eye of megabanks, expands working possibilities

The world of finance is a tough one in which a huge amount of information is exchanged, and both speed and precision are essential.

However, because of the heightened security and compliance requirements involved, and given the nature of the information that financial services deals with, it took years until a suitable information platform was developed.

This can also be interpreted as a sign of how difficult it was to develop a tool so secure that it could convince financial institutions (where phone calls, e-mails, and use fax and stamp on the physical documents were the norm for decades) to utilize such a platform; It was in this context that Symphony, a startup company that developed a secure collaboration platform, was set up in 2014.

It is a unicorn company from the Silicon Valley whose office in Japan is situated in Global Business Hub Tokyo.

According to Mr. Gen Uehara, who oversees its expansion in Asia and Japan, Symphony is “a collaboration platform that allows professionals in the financial industry to communicate through chat, to work on mobile devices, and to connect via video calls, even with the need of security, compliance, and regulations involved. As the platform also accepts applications, it is possible to create chatbots and connect RPA (robotic process automation) tools to improve work efficiency.”

So far, it has been adopted by over 340 financial institutions around the world. In Japan, it has been accepted by megabanks and securities companies, and is being tested at the Tokyo Stock Exchange. 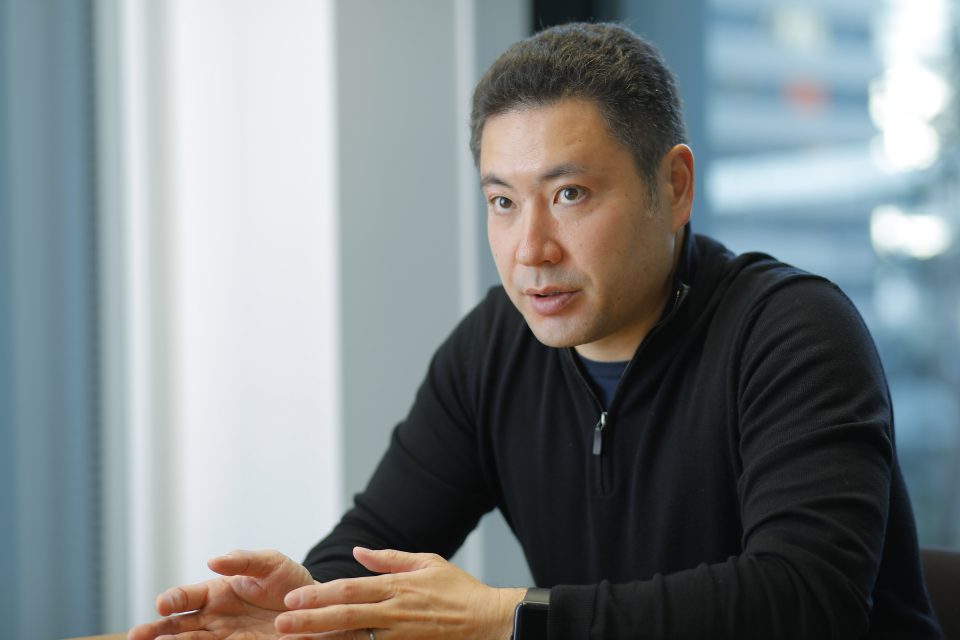 One striking peculiarity about Symphony is that it started from a joint investment made by 15 major financial institutions, including Goldman Sachs and Citigroup.

“All financial institutions were aware of the challenge concerning work inefficiency. However, if only a single financial institution overcomes that challenge, and the securities companies, trust banks, and information vendors the institution does business with do not follow suit, the effort is wasted. This problem can only be solved if the entire community changes. Therefore, we thought that the most efficient alternative was to enter into a joint investment and promote extensive development.”

Naturally, financial institutions also had ideas and the necessary technology to develop them; however, Symphony acquired Perzo, a company that was building a secure messaging platform, and incorporated its technology into Symphony’s own platform.

“The strength of Symphony’s platform is that it can optimize not only internal and external work but also contexts that require collaboration with external parties. As the finance industry cannot tolerate information leakages, Symphony’s technology provides the highest standard of compliance and security while maintaining high confidentiality.

Financial institutions, which handle huge volumes of data, had been trying to use cloud services, but were reluctant to do so. As an alternative, they would build their own internal data centers. Symphony’s encryption technology, however, made it possible for them to transfer large amounts of data to the cloud.

“Symphony offers a cloud-type SaaS service in which all data passes through our cloud. However, in order to read the data stored in the cloud, it is necessary to have a key that is held only by our clients, the financial institutions. We do not possess that key.”

Even if Symphony is hacked, the encrypted data are shown as meaningless rows of numbers.

“This seems like a simple configuration, but it did not exist. This configuration allows an end-to-end encryption in finances and is a special technology patented by Symphony. Security and compliance are two of the most important elements for financial institutions.”

It is like a key to enter your house; there is no access without the key. According to Mr. Uehara, the technology developed by Symphony meets the financial regulations of every country it is currently deployed in.

Another aspect that helps make work efficient is the fact that it is open platform. It can capture the context of a chat dialogue and automatically display related content from external sources. Suppose, for example, that a possible investment in a certain company comes up in a chat. The platform can pull related information from the internet and internal data using the name of the company and keywords such as “investment” and “opportunity.” Thus, there is no need to interrupt the conversation to do research, saving time that can be better utilized for decision-making.

“It is possible to prioritize information with the mention function of the chat and be notified of important messages with a pop-up. Also, say I need information about crude oil; the only possible way to get such information is by gathering scattered internal information or by speaking with a superior. However, even if my superior finds me an expert from the Middle East and I e-mail them, they might not necessarily provide me what I need.”

To counter this issue, the platform allows adding hashtags to internal information. By searching “#crudeoil,” for example, it is possible to find expert information generated internally. This changes work efficiency dramatically.

The tough and stimulating experience at Goldman Sachs made a difference 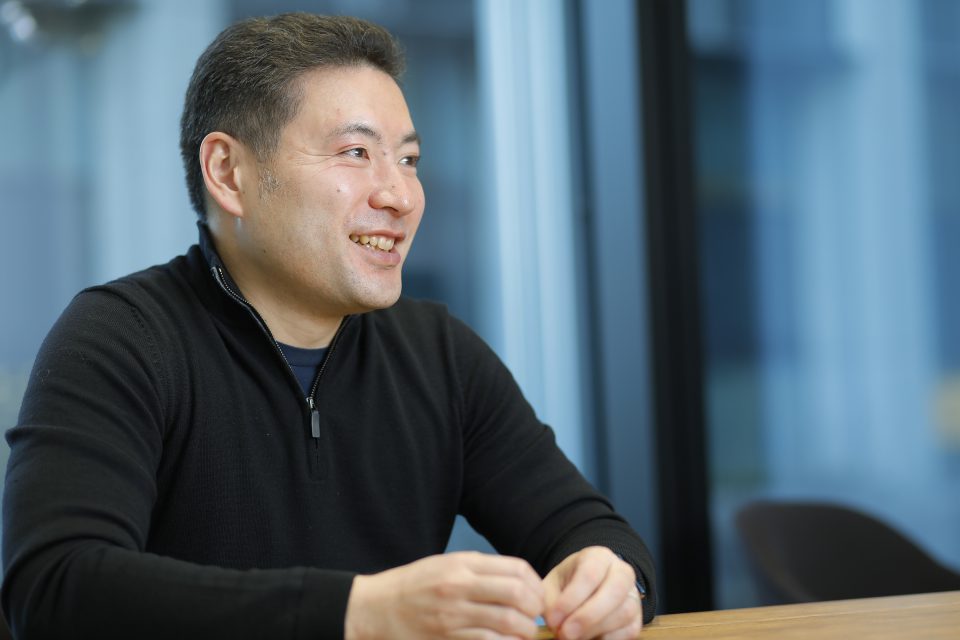 Mr. Uehara, who joined Symphony in 2018, had been working since 1998 at the Japan office of Goldman Sachs, where he attained the designation of Vice President.

“I was actually involved in the development of Symphony’s prototype while at Goldman Sachs. I identified with Symphony’s mission to optimize collaborations in the financial industry and agreed to switch over.”

After moving to the US owing to his father’s work, Mr. Uehara graduated from a local high school and entered Columbia University, where he studied civil engineering. As he was interested in computers, he decided on a career in the financial industry, which has state-of-the-art equipment, and joined Goldman Sachs, Japan.

“If you give your everything, you get to decide many things independently. You can work freely and collaborate with people from all over the world. It was fun.”

He also says that his bosses and subordinates were not necessarily at the same place. It was common to work with a diverse team of foreign members.

“In Japan, people do not ask many questions even in meetings; however, working with non-Japanese people and people with diverse background is different. Whenever we had to make a decision, things got intense (laughs). But because the risks are examined from various angles, the chances of making huge mistakes were small. Those who go through this process come out strong.”

Symphony’s business commenced in Europe and America; however, he joined the company when it was about to expand to Asia.

Finance, fintech, and IT: Otemachi is a progressive district that shares the same atmosphere

“One of the factors that influenced our decision was Otemachi. I believe there is a synergy when partners from financial, fintech, and IT industries breathe the same air.”

Typically, a fee is charged for a newly added user for Symphony, but when the challenge of novel coronavirus emerged, it was decided that no fee would be charged for the next three months for any additional user ID. This decision would later be implemented in Europe and North America.

“Another reason (for the decision to choose Global Business Hub Tokyo) was its stress-free environment. Meeting rooms are always available. It has booths for phone conferences, as well as spaces for last-minute conferences and meetings. Inefficiency is a result of small doses of stress that accumulate over time; thus, eliminating stress was crucial. Without a good office space, it is difficult to create a best organization.”.

A single piece of awareness drastically changes the organization’s performance 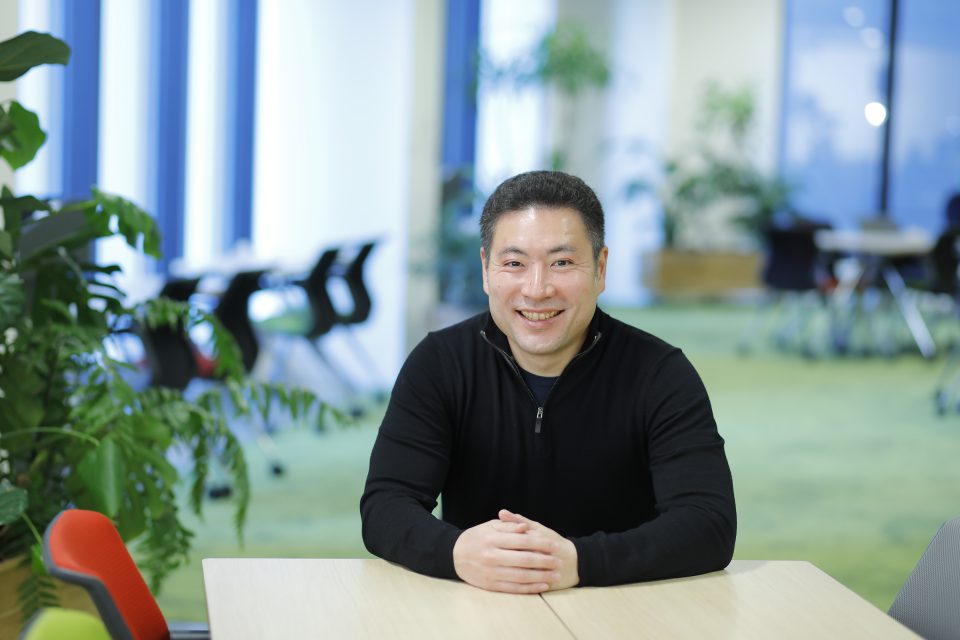 He adds that the most important thing to enhance an organization’s performance is to ensure that every employee fully understands the company’s mission.

At the moment, the staff based in Tokyo, Hong Kong, Singapore, and Australia oversee the operations in Asia.

“I have subordinates overseas, but even I do not really track whether they are in the office. They also think they will be rewarded simply for working hard; their performance is only evaluated based on the results they deliver. Rather than whether they came to the office and how hard they worked, what matters is what projects they developed and how. Again, the physical distance among the members makes it important that everyone shares the same mission. If the mission is clear, every member knows how they should proceed.”

“The mission is the most important thing for me too,” he says. 。

“‘I want to overcome such challenges and work on this kind of thing along with the customer.’ If you have the right mission, work can be fun.”

This is a bona fide example that even a difficult job can be viewed with a positive attitude when the mission is clear. This becomes a strength in itself and this is the secret to Mr. Uehara’s tough and resilient mentality.

acting head of the APAC region of Symphony

After graduating from Columbia University, he was involved for nearly 20 years in the construction of a technology platform and workplace reforms in Asian countries, including Japan, Hong Kong, and India, for Goldman Sachs, where he also contributed to the introduction of Symphony.
He has been engaged in business development in the Japanese market and Asia as the head of Asia Pacific Strategy and Planning at Symphony since August 2017. Using his experience with technology infrastructure and platforms in the global financial industry, he supports the improvement of work efficiency through a communication platform among financial institutions around the globe and in Japan.

A technology company jointly founded by 15 worldwide financial companies in Silicon Valley in October 2014. It offers a highly effective and safe workflow application that has changed the way companies and users communicate. Symphony’s goal is to support individuals, teams, and organizations of all sizes to have significant productivity improvements while providing protection for complex data security and full compliance with corporate norms. Based in Palo Alto, California, Symphony has expanded globally with offices in Hong Kong, London, New York, Paris, Singapore, Sophia Antipolis, Stockholm, and Tokyo.