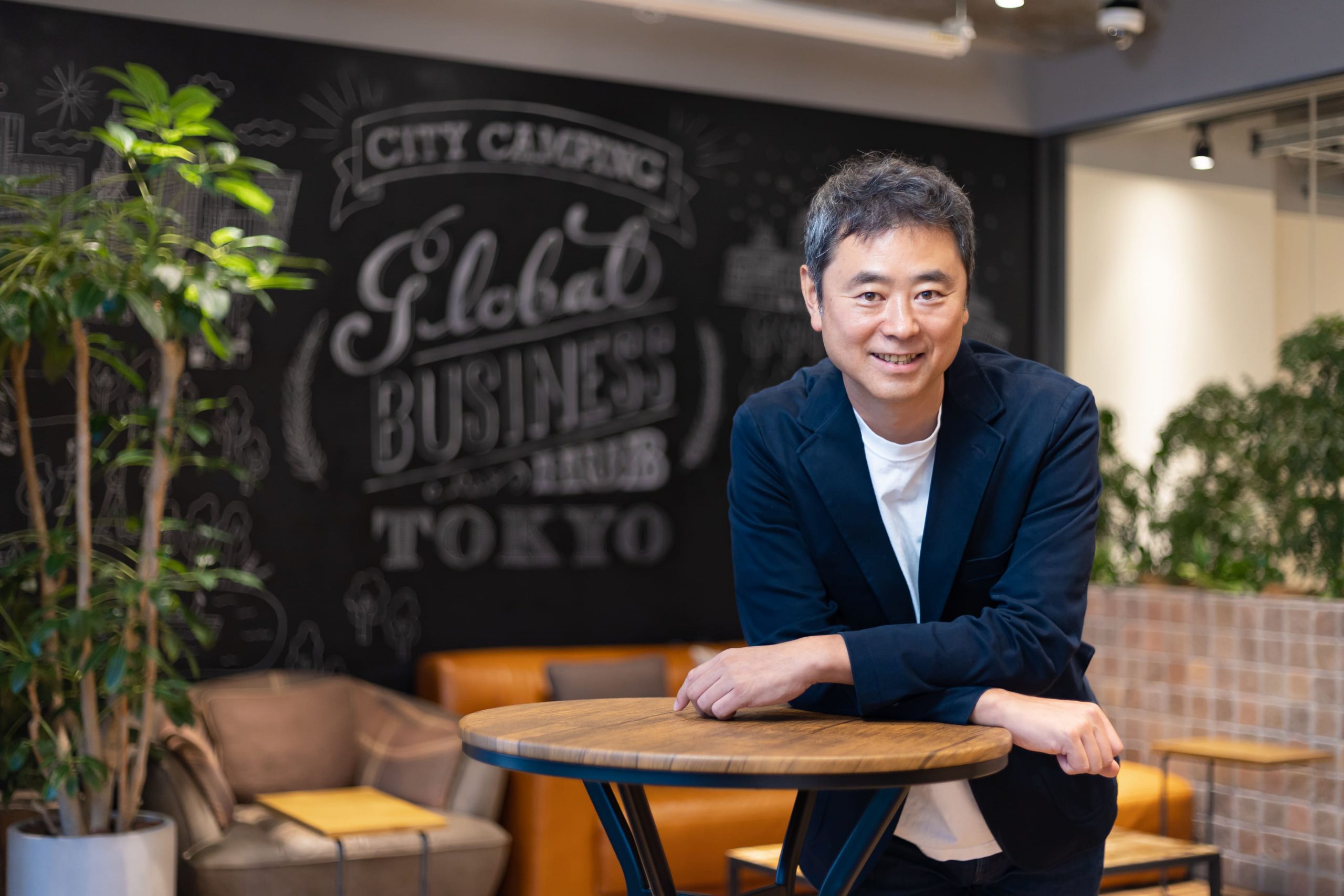 What values do people working on the global stage have? What do they look for in the places where they work and the people with whom they work? These interviews are focused on overseas growth companies and cutting-edge Japanese venture companies that are currently gaining momentum.

This time, we’ll be hearing from Masahiro Ohno, Representative Director and CEO of URBANBASE, which provides VR/AR/AI solutions using proprietary patented technology for the interior design and real estate industries, as he talks about the worldview he aims for with their outstanding technology. 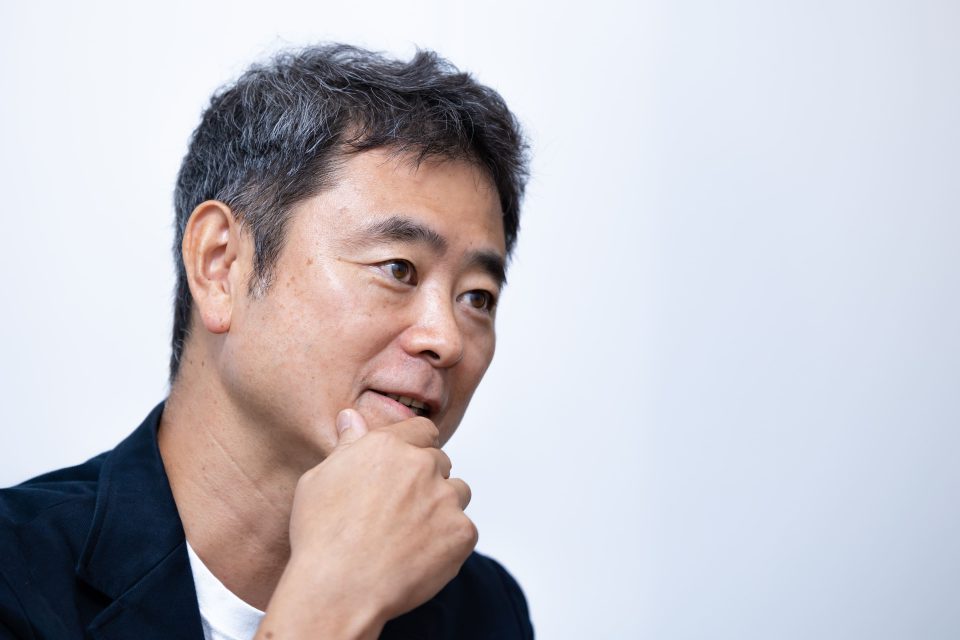 The importance of spatial data is increasing due to the spread of AR and VR technologies in the interior design and real estate fields, as well as the rapid growth of the metaverse market against a backdrop of innovations in communication and video technologies. However, it is not easy to quickly create a database of spatial data. In many cases, drawings are floor plans, and three-dimensionalization requires skills to manipulate special software such as 3D CAD. Against this background, URBANBASE, founded in Korea in 2014, developed its “AutoSketch” technology, which instantly and automatically converts images of 2D drawings into 3D space. The Japanese corporation is currently housed in Global Business Hub Tokyo.

“‘AutoSketch’ realizes 3D stereoscopic drawing using a unique AI machine learning algorithm based on pre-learned drawing information. Looking around the world, there is no other technology like this, it is truly unique,” says Masahiro Ohno, president of the Japanese corporation. With the vision that “All indoor space information from around the world will be registered on the platform and made available free of charge,” the company is expanding its business, mainly in the interior design and real estate industries.

In South Korea, more than 85% of housing drawings have already been compiled into a database. AutoSketch has already been patented in South Korea, Japan, the United States, the European Union, and China, with patents pending in other countries as well. The Japanese corporation plays an important role as a base for expansion in the Japanese market and globally.

“When you currently search for a property in Japan, most of the time the drawings of the room are displayed in 2D. If you can see them all in 3D, you can do more. We want to provide the world with technologies and services that revolutionize conventional wisdom.” 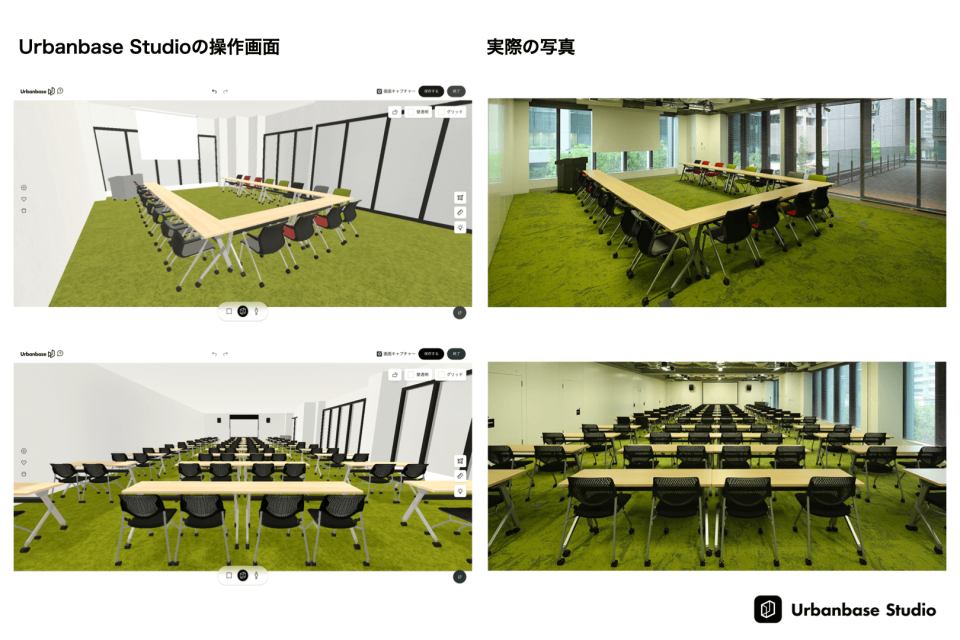 The most prominent service that URBANBASE offers is the SaaS-type interior 3D simulation service “Urbanbase Studio,” released in January 2021. With intuitive operability, you can easily draw 3D drawings, and you can place furniture, miscellaneous interior goods, and so forth in the completed 3D space. You can even walk through the space. Urbanbase Studio is also being considered for introduction at GBHT.

“In addition to companies that coordinate living spaces such as interior design stores and house makers, we have also started offering it to real estate companies that do office rentals. In the future, we would like to expand the scope of use to include store interiors and event spaces.”

In March 2021, the company launched the “Drawing 3D Conversion Service,” which uses AutoSketch technology to perform 3D conversion of floor plans. In June of the same year, the company launched the AR mobile app “Urbanbase AR,” which combines the spatial analysis technology “Space AI” with AR technology. It does everything, such as AI space analysis of rooms, product recommendations for furniture and home appliances, simulations through AR display, and links to e-commerce websites, all in one app. It is provided free of charge as a sales promotion tool for furniture and home appliance manufacturers and dealers.

“There are many players in Japan for each service, doing things like spatial simulation of interior design and 3D versions of drawings of newly built real estate. But URBANBASE is the only company that can provide a 3D spatial data platform that covers all of these. That's our competitive advantage.” 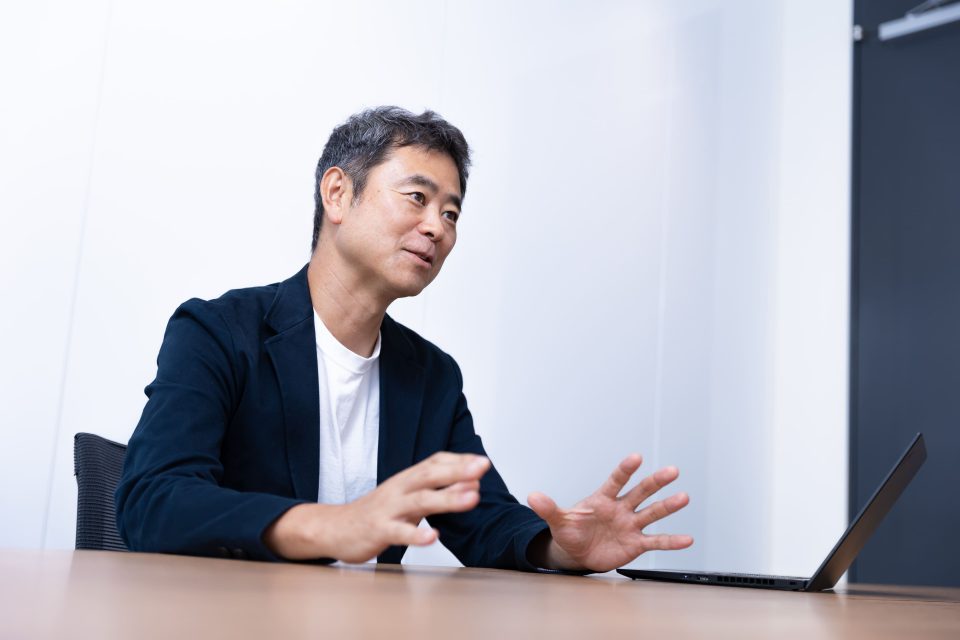 Until now, URBANBASE has been providing services in BtoB. In 2022, however, they plan to expand the functions of Urbanbase Studio and provide it free of charge as a BtoC service.

“We’ll start in Tokyo, but, by finding the floor plan of your home from the map and making it 3D, you can coordinate new furniture, wallpapers, flooring, and so on. We can simulate whether you can place current furniture, home appliances, and such things not only in the room you currently live in, but also in the room you plan to move into.”

By providing this service, it is possible to accumulate data on living spaces where people actually live. Being able to grasp trends such as what kind of layout people use and what kind of furniture they prefer in terms of color and shape will expand the possibilities of URBANBASE’s business.

“By accumulating and analyzing the data on what kind of spaces people live in, and providing it to furniture and home appliance manufacturers, we think it will be useful for product development. We’re still at the idea stage, but we are proceeding while confirming the potential of business development one step at a time.”

With the launch of the BtoC service, URBANBASE will move a step closer to realizing the world that they hope for, one in which “all indoor space information from around the world can be registered in the platform and used free of charge.” 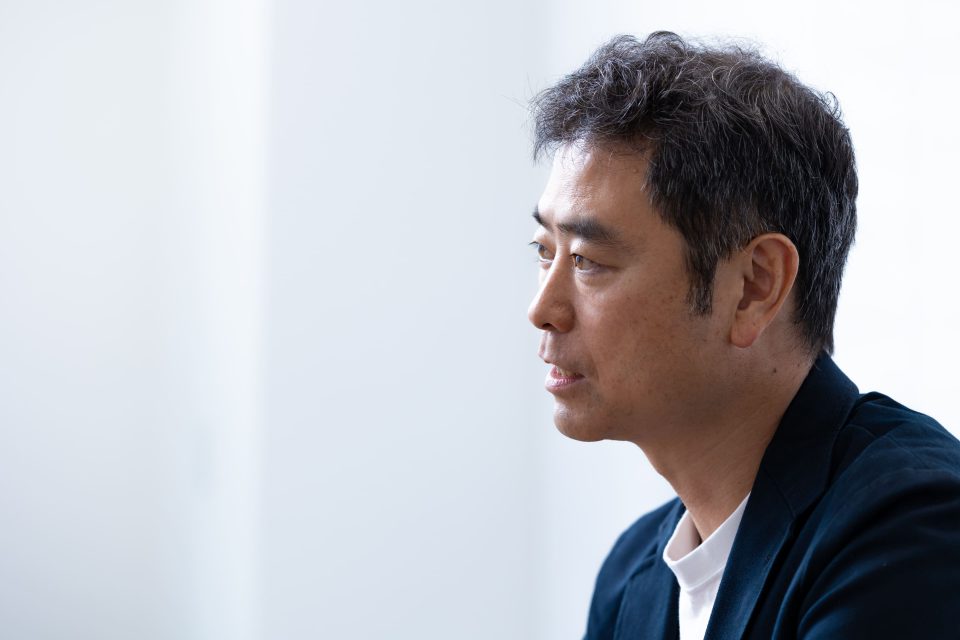 Ohno has longstanding experience in the IT field and has worked for industry-leading companies such as GMO and SoftBank. He also has rich overseas experience from working at foreign-affiliated companies in Silicon Valley, Singapore, and Australia. His encounter with Korea’s URBANBASE came when he was supporting overseas startups as part of the establishment of a joint venture with the Alibaba Group at SoftBank.

“When I saw this technology that instantly turns 2D drawings into 3D, I knew that this would change the world. I've seen a lot of great startups, but URBANBASE's innovation was outstanding. In addition to technology, I also felt I matched well with its members, and I wanted to achieve global expansion together with these people, so I applied to be the CEO of the Japanese corporation. People around me had a lot to say about jumping into a startup in my late 40s, but I didn't hesitate at all.”

Ohno, who fell in love with URBANBASE, became part of the company from the standpoint of supporting startups. However, he says that he regrets many things about the launch of the corporation in Japan.

“First of all, there was the language barrier. The Korean who joined us to set up the Japan corporation also interpreted for us, but it was more stressful than I’d imagined to be in a situation where I can’t convey what I want to without having to rely on someone else. The development processes are different between Japan and Korea, so, even though we thought we were talking about the same thing to each other, in fact the content was completely different.”

In addition, there was a wall of knowledge. Although Ohno had a wealth of knowledge in the IT field, he was starting from scratch in the interior design and real estate industries, where URBANBASE does most of its business. One by one, he acquired technical terms and bought real estate on his own, accumulating knowledge.

With the strong foothold at GBHT, they will challenge themselves to realize their vision 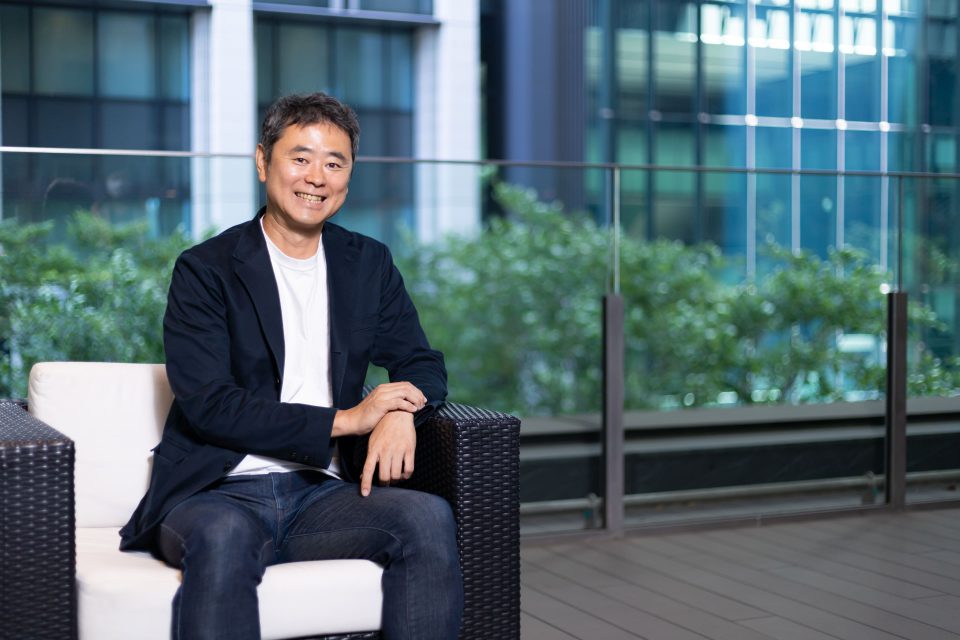 Even amid the pain of childbirth, Ohno believed in the worldview depicted by URBANBASE and moved ahead. One turning point was a project with Mitsubishi Estate. They were introduced by JETRO, who had provided support when the Japanese corporation was established.

“At that time, we didn't have any specific services yet, but they had high hopes for the technology that is our strength, which led to co-creation. We just got right into it, started developing with enthusiasm, and somehow made the delivery, which really boosted our confidence. It was based on the simulation mechanisms developed here that ‘Urbanbase Studio’ was born.”

The decision to move into GBHT was also a result of this project, but the benefits were greater than he had imagined. For startups, not only project results but also office locations are important points that lead to trust.

“Moreover, GBHT is flexible in its system. We have a one-desk contract, but it’s a great help because our employees can freely come and go, and they can use the meeting spaces. And exchange meetings between tenant companies may also lead to business, so it is very beneficial for startups. The other day, I had a meaningful time at a country manager's meet-up.”

The number of employees is steadily increasing, and URBANBASE is about to release a BtoC service. Ohno is enthusiastic about making this year a year of leaps and bounds.

“We want to have a situation where anyone who wants to move or change the floor plan will first use an URBANBASE service, so we hope to increase the number of regular users of the BtoC service. Moreover, we would like to launch a service that helps with interior design coordination in the future. By connecting with furniture manufacturers and interior design coordinators, we would like to enhance it into a service that is fun to use.”

While expanding its business from residences to offices and event spaces to collect indoor space data, it will also expand its network with various players and regular users who do things with space. Ohno, who is pushing forward without fear of risks to achieve the worldview he is aiming for, is looking ahead to a prosperous future where people can enjoy space more.

After working in the music industry as a new graduate, he moved to the United States in his late 20s. He obtained a master's degree in computing and worked in Silicon Valley as an engineer, after which he returned to Japan. At the GMO Group, he was in charge of new business and service planning. Subsequently, he was involved in service launch and project management as a consultant at the Singapore and Australian subsidiaries of a major American IT distribution company. He was then engaged in the launch of a joint venture with the Alibaba Group at SoftBank. There, as part of supporting overseas startups, he encountered URBANBASE in Korea and launched a Japanese corporation in 2019. The Japanese corporation started transactions with several major companies and is responsible for growth as a base for global expansion. He is a father of two. On his days off, he enjoys taking care of the children—for example, by going camping.

URBANBASE is an IT company that focuses on 3D space. They own patented technology that can instantly create 3D images from 2D drawings and provide a 3D space platform for real estate and interiors. In application development utilizing VR/AR/AI, they have a track record of having many applications adopted by furniture and home appliance retailers.